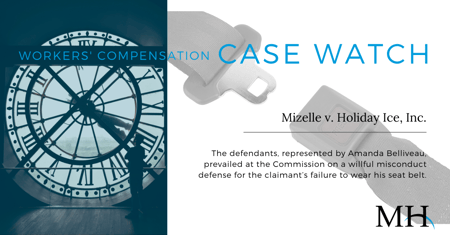 In Mizelle v. Holiday Ice, Inc., claimant got into the employer’s truck to make a delivery and started driving without putting his seat belt on.  He knew the law required him to wear a seat belt but admitted that he did not put it on and intended to put it on later during the trip.  Within five minutes of starting the trip he lost control of the truck and was injured when he was ejected from it during the crash.

The defendants, represented by Amanda Belliveau, prevailed at the Commission on a willful misconduct defense for the claimant’s failure to wear his seat belt.

The claimant appealed the Commission’s opinion to the Court of Appeals, arguing that although he was not wearing his seat belt during the accident, the defendants were required to prove a deliberative intent in failing to wear it.  The claimant also argued that even though he was ejected from the truck in the accident, the defendants did not prove that failure to wear his seat belt proximately caused his injuries.

The Court of Appeals rejected both of these arguments, determining there was credible evidence in the record to support the Commission’s findings.  The Court stated that the claimant’s conduct clearly demonstrated his willful choice not to wear his seat belt.  “By his own admission, claimant knew that he was forbidden to drive a motor vehicle without wearing a seat belt, and yet he ‘intentionally undertook the forbidden act.’  Further, by acknowledging that he intended to put his seat belt on at some point, and yet did not put it on when he knew he was required to do so…claimant demonstrated that he was violating [the seat belt law] purposefully, not accidentally, and with deliberate intent.”

Read about this defense win in Insurance Journal: Driver Injured in Accident Not Eligible for Workers’ Comp After Failing to Wear Seat Belt