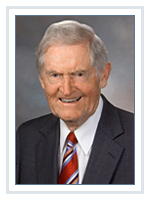 A. Linwood Holton, Jr., In Memoriam

McCandlish Holton, PC remembers and mourns the passing of former Virginia Governor Linwood Holton, namesake of the law firm and our respected colleague and friend.

Governor Holton was one of the most prominent civil rights governors in history, ending Virginia’s era of Massive Resistance to desegregation. His tenure as governor saw advances in school desegregation, expansion of community colleges, the establishment the Virginia Governor’s School Program, and important strides to address environmental issues in Virginia.

Following his career in public office, Gov. Holton joined McCandlish Holton, PC in 1994 where he practiced law as part of the Government Relations team. But more importantly, he served as a mentor and inspirational leader. He is survived by his wife Virginia “Jinks” Holton, his children Anne, Tayloe, Woody, and Dwight, as well as his many friends and admirers.

A statement issued by his children is a fitting tribute to Governor Holton as a leader and father:

"To the world, Governor Linwood Holton is known as a giant of civil rights and change. When others stood in the doorways of schools to block de-segregation, our Dad walked us (and bused us) to integrated schools to show the rest of the world the way of justice .... But to us, he was simply a great Dad – a hero who helped us with our math homework, told us funny stories, and showed us the way to live committed to what is right.’’

We will all miss him.