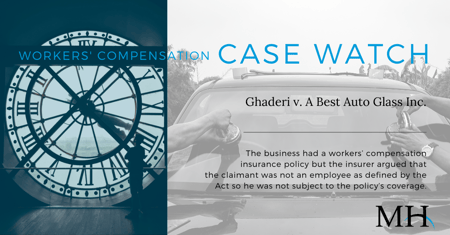 The claimant was injured at the auto glass company he owns.   The business had a workers’ compensation insurance policy but the insurer argued that the claimant was not an employee as defined by the Act so he was not subject to the policy’s coverage.

The claimant argued that he qualified for coverage as an executive officer and that his rejection of coverage was not effective because it was not filed with the Commission.  The Deputy Commissioner disagreed, finding that the claimant was not an employee because he was the sole shareholder of a stock corporation and did not expressly elect to be covered pursuant to Va. Code § 65.2-101(l)(n).  The Commission affirmed.

Defense for this case was Joe McNally.

Climbing Fall Not ‘In The Course Of’ The Employment