Climbing Fall Not in the Course Of the Employment 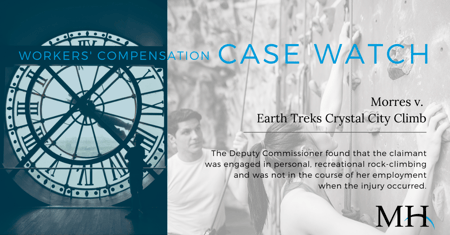 In Morres v. Earth Treks Crystal City Climb, the claimant worked at a recreational climbing gym.  The employer required employees to clock in before their shifts and prohibited employees from performing personal climbs while on the clock.  Before clocking in for her shift, the claimant did a warm-up climb, which she said was in preparation for performing rope maintenance.  She climbed with another co-worker, who was not scheduled to work that day.  During her warm-up climb, she took a practice fall.  She was injured in the fall.

The Commission went on to say “The evidence also does not preponderate to show the claimant’s purely recreational climbing prior to her work shift benefited the employer beyond the intangible value of improving employee health and morale….Indeed since…most jobs require some level of skill, a holding that an employee is within the course of their employment when engaged in an activity that hones that skill necessarily expands the concept of ‘in the course of’ to a point of meaninglessness.”

Telehealth Treatment Did Not Affect Weight Given to Doctor's Opinion