Limousine Driver’s Accident Did Not “Arise Out Of” the Employment 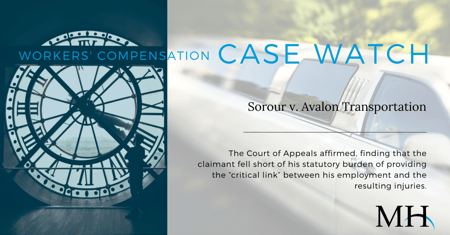 In Sorour v. Avalon Transportation, the claimant, a limousine driver, was injured in a single vehicle accident. At his supervisor’s request, the claimant was driving to the company’s office.  As he exited the highway he hit the guardrail on the exit ramp at a low speed, causing his injuries.

The Deputy Commissioner denied the claim.  The Full Commission affirmed the denial, holding that the claimant could not establish the causal connection between his injury and the conditions under which his employer required the work to be performed.  The claimant appealed to the Court of Appeals.

In an unpublished opinion, the Court of Appeals affirmed, finding that the accident was unexplained.  The Court held that the claimant presented no evidence to establish that his injuries arose out of the employment.  The evidence failed to prove how the accident occurred.  Without more, the claimant fell short of his statutory burden of providing the “critical link” between his employment and the resulting injuries.

No Obvious Sudden Mechanical or Structural