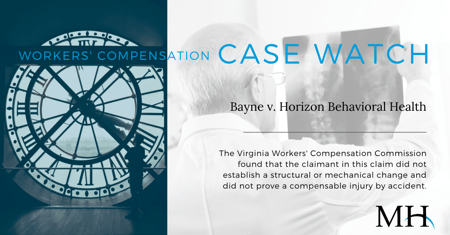 The claimant, a clinical mental health examiner, alleged an injury to her low back as a result of an eight-year old child charging into her ten to fifteen times, causing her back to strike a horizontal door handle.  The claimant had a history of four lumbar surgeries prior to this incident.  The claimant testified that she felt a sharp increase in pain as a result of this incident.  In affirming the Deputy Commissioner’s denial, the Full Commission cited Dr. Vanichkachorn, who treated the claimant before and after the alleged work accident.  The doctor opined that there was no evidence of any structural or mechanical change in comparing diagnostic studies taken before versus after the incident.  He opined that the claimant did not sustain a new or acute injury as a result of the incident and that the claimant’s ongoing symptoms were related to her prior back surgeries.  The Commission also cited the claimant’s chiropractic records, which showed no increase in lumbar symptoms on the date of the incident.  The majority cited Jones v. Walgreens Co., JCN VA00001145400 (June 19, 2017), in which the claimant was diagnosed with a lumbar strain that aggravated a pre-existing condition, but imaging studies were negative for any structural change, and benefits were denied because it was found that neither the strain nor the aggravation caused a mechanical change to the claimant’s lower back.

Commissioner Marshall concurred in part and dissented in part.  Specifically, he concurred with the finding of the majority that the claimant in this claim did not establish a structural or mechanical change and agreed that she did not prove a compensable injury by accident.  Commissioner Marshall dissented as to the majority’s reliance on Jones v. Walgreens Co., objecting to a broad application of the premise that when a claimant is treating for a pre-existing condition, that an increase in symptoms alone (absent supporting medical evidence) after a new accident is insufficient to prove compensability.

Chandler Test Must be Applied to Requests for Spousal Care

Amanda Tapscott Belliveau is a director in the Workers' Compensation Practice Group. Her practice is primarily focused on advising employers and insurance carriers on the defense and resolution of workers’ compensation claims. She handles all aspects of workers’ compensation litigation, including discovery, hearings, settlement, appeal, and mediation.  Amanda regularly represents employers and carriers before the Workers’ Compensation Commission and before the Virginia Court of Appeals.