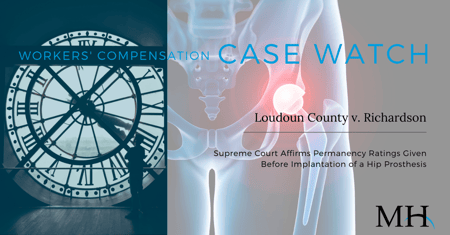 The Deputy Commissioner awarded permanent partial disability benefits, concluding that the proper measure for loss of use was the rating made before the hip replacement surgery.   On appeal, the Full Commission affirmed, holding that determining the loss-of-use rating before a surgery that implants a prosthesis was the correct standard. Then the Court of Appeals affirmed the Full Commission’s decision.

Finally, the employer appealed to the Supreme Court of Virginia.  The Supreme Court framed the issue as one of statutory interpretation and recited the history and development of the Court of Appeals’ loss-of-use determinations under Va. Code Sec. 65.2-503. The Supreme Court affirmed stating that “Awarding compensation based on a pre-surgery loss-of-use rating recognized that a work-related injury has permanently deprived the claimant of natural functionality.  Although the procedure to implant a prosthetic hip joint is commonly called a total hip ‘replacement,’ the natural joint’s function and ability to heal is irreplaceable.”