Payment of Medical Bills Sought Despite None Owed 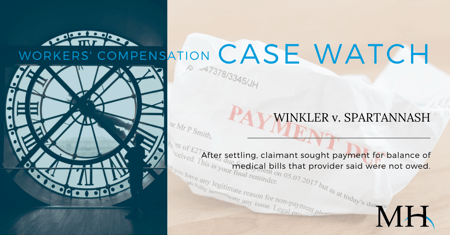 The claimant had previously settled his workers’ compensation claim.  Following settlement approval, the claimant, by counsel, filed a claim seeking full payment of medical services from a medical provider.  Partial payment of the bills had been made, with an outstanding balance of approximately $25,000 remaining.

The defendants moved to dismiss, producing an affidavit from counsel for the medical provider, stating that no additional payment was sought or expected for services rendered.  A previous agreement was attached to the affidavit which showed that the provider accepted partial payment as full satisfaction of all billed charges.  The defendants also argued that the claimant had waived any entitlement to the payment of medical expenses when his settlement was approved.

The Deputy Commissioner dismissed the claim.  The Commission affirmed, finding that no debt existed, because the controversy between the provider and defendants was resolved by the agreement attached to the affidavit.  The claimant had no right to medical treatment which was at risk.  Thus the Commission found there was no controversy to be determined.  Commissioner Marshall concurred.