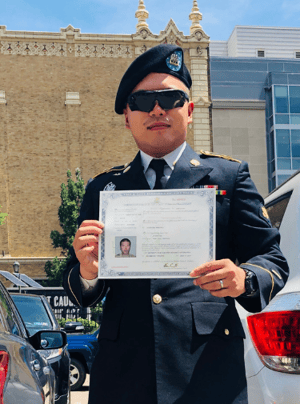 Litigation is often the only way forward for immigrants. That was what U.S. Army Specialist Junfei Ge concluded as he waited nearly three years for the “expedited” naturalization he was promised by the U.S. government when he enlisted under the Military Accessions Vital to the National Interest (MAVNI) program.

Immigration Attorney David Gluckman filed a suit on behalf of SPC Ge in the U.S. District Court for the Eastern District of Virginia to seek judicial relief from this extensive delay and to force the government to act on his naturalization application.

On June 28, 2019, the Court ordered U.S. Citizenship and Immigration Services to adjudicate SPC Ge’s naturalization application within 45 days.  His case was promptly approved, and SPC Ge was proudly sworn in as a new U.S. citizen on July 17, 2019.

If you or anyone you know is frustrated with a delayed or denied case, contact David Gluckman or any of the other attorneys in the McCandlish Holton Immigration Practice Group.  While we cannot guarantee a success like SPC Ge’s, we will take the time to meaningfully evaluate what options may be available to you.

Read SPC Ge telling his story, including what visa options he abandoned for the MAVNI program, the impact on his family and career, and why he so sincerely wished to become a citizen and fulfill his “vital” contributions to the national interest: Declaration of Army Specialist Jungfei Ge.

David Gluckman is a Director in the Immigration Practice Group. David is a passionate advocate who expertly guides businesses and individuals through our astonishingly imperfect system towards their short- and long-term goals. David has extensive experience in business and family immigration, and relishes the most complex of cases. Email David.