Discrete Event vs. Injury Over Time: The Supreme Court Weighs In 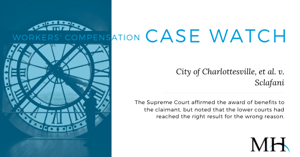 On August 26, 2021, the Supreme Court of Virginia issued an Opinion in City of Charlottesville, et al. v. Sclafani, Record No. 200791 (Va. Aug. 26, 2021), which provides additional guidance regarding the Van Buren “injury by accident” line of cases.

After a series of appeals and remands, the Court of Appeals affirmed the Commission’s determination that Sclafani, a police officer, sustained a compensable injury by accident when he injured his left shoulder during a four-hour afternoon training session.*  During that session, the claimant’s activities included being put on the ground and handcuffed, picked up, and moved away.

The Supreme Court found that asserting that an injury occurred over a four hour time period where multiple potential causative events occurred is not enough to establish compensability.

In Sclafani, the Supreme Court affirmed the award of benefits to the claimant, but noted that the lower courts had reached the right result for the wrong reason.

The Supreme Court found that the evidence that the pain began when the claimant was picked up on this occasion established a compensable injury by accident and justifies the award of benefits, as opposed to the lower courts’ incorrect finding that it was a result of the four hour training session.

It is important to note that the Court specified that this opinion does not reverse Van Buren.  In Van Buren, a firefighter was awarded benefits when he injured his shoulder during a forty-five minute period spent removing a large man from a shower.  In a footnote of the Sclafani Opinion, the Court notes that the facts in Van Buren established a single causative event over a period of time, as opposed to numerous discrete events (such as in Sclafani).

* Originally, the Commission found that the claimant sustained an injury by accident during his eight hours of training during the workday.  The Court of Appeals found that 8 hours (with a lunch break in the middle) did not constitute a distinct period during which an injury by accident could occur (specifically finding that it lacked ‘sufficient temporal precision’), and remanded the matter to the Commission for a finding that the injury occurred during the 4 hour afternoon training session that occurred after the lunch break.

When assessing cases, it is important to:

Court of Appeals: Pharmacies are Health Care Providers Subject to One Year Statute of Limitations