Commission Further Defines What Constitutes a Compensable Injury by Accident

The claim below represents another example of how the Commission is distinguishing compensable, identifiable events from non-compensable cumulative/repetitive trauma.

In a January 7, 2022, Review Opinion in Conner v. Centra Support Building, the Commission reversed the Deputy Commissioner’s Opinion that found that the claimant had established a compensable injury by accident.

The claimant worked as a valet for a hospital, which required him to take customer cars from the terrace to a parking lot, which was a ten-minute walk from the terrace. The claimant estimated walking five miles per day at work. He testified that the employer did not have any footwear requirements other than an instruction to wear black shoes. The claimant testified that he usually wore diabetic shoes or inserts to work, but on December 27, 2019, he wore boots that came up above his ankle. He testified that on the evening of December 27, 2019, after arriving home from work, he discovered a wound on his right ankle. He denied having a wound that morning before putting on his boots and leaving for work. The claimant’s pre-existing diabetes and neuropathy prevented him from feeling the wound form.

This case illustrates the importance of both the timeline of events and the nature of the injury. It can be contrasted with the 2020 decisions in Farrish of Fairfax v. Faszcza and Gomez-Flores v. MK Concrete Constr. [SEE PAGES 58 & 59, 2021 Case Digest: Noteworthy Virginia Workers’ Compensation Cases*.], both of which awarded benefits to individuals with diabetic neuropathy who sustained puncture wounds to their feet that were not discovered until some time after the puncture was received.

Though all three of these cases involve injuries sustained at an unknown time during a workday (as none of the three claimants was able to feel the injury at the time it occurred due to neuropathy), the injury in Conner was consistent with cumulative rubbing of the boot upon the ankle, whereas the nature of the injuries in Faszcza and Gomez-Flores are single events in the form of a puncture.

WHAT IT MEANS FOR YOUR CLAIMS

In your claims, if the claimant is unable to identify with specificity when and how an injury occurred then look to the medical evidence to discern whether the type of injury is consistent with cumulative activities, or if it would likely be caused by a single event. 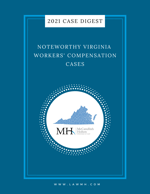 *If you have not received the 2021 editions of the Virginia Workers’ Compensation Adjuster’s Handbook and Noteworthy Cases, please request free copies via email. 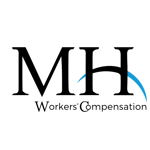 Workers’ Compensation Practice Group at McCandlish Holton defends workers’ compensation claims in all areas of Virginia from initial investigation to the trial and appellate levels of litigation.

Our experienced team provides innovative legal strategies tailored to the needs of your claims.  We carefully balance aggressive advocacy with skilled diplomacy to successfully resolve claims. Contact Us.